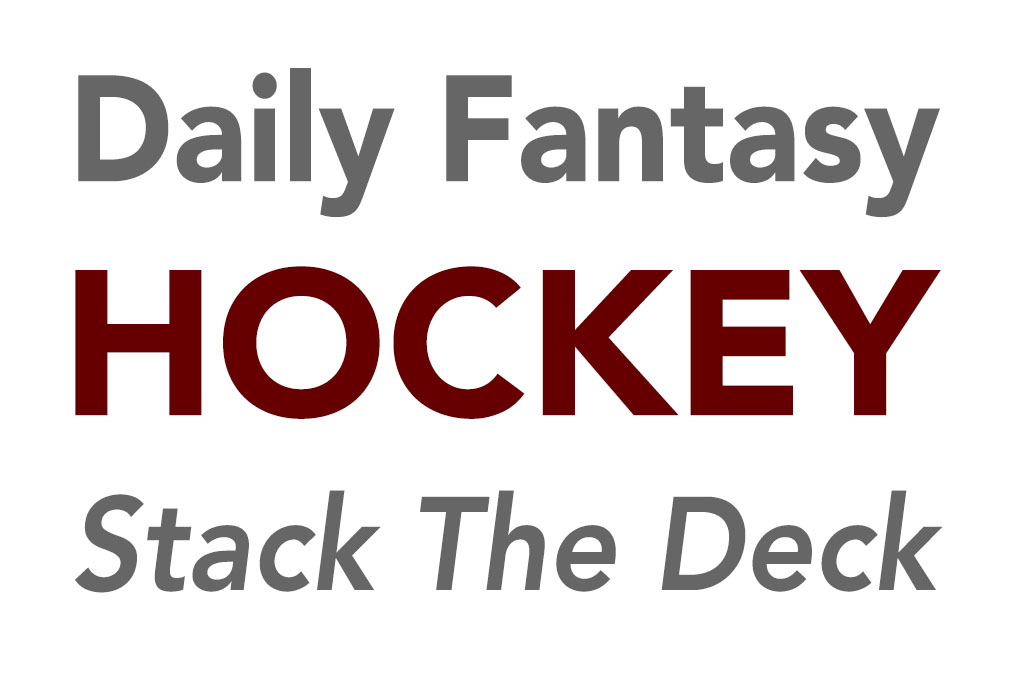 Welcome to Stack the Deck, where we focus on the key players on the 1/7 NHL DraftKings slate, and determine whether they should be played with a teammate, or ridden individually. Stacking is a common tactic in NHL, with linemates and power play units staying relatively stable throughout the course of a game, and to a smaller extent, a season. Here are a few players I am targeting on Thursday’s seven-game slate, and my thoughts on who to play with them in order to stack the deck in your favor.

[ Sign Up For RotoQL Now. The Fastest DFS Lineup Builder In The Industry]

Player Matchups are gathered from HockeyViz.com

Get the latest NHL Odds on XN

Tuesday was a bit of a failure on my part. Dallas was a huge bust, the Flyers top line failed to produce, although the rest of the team managed to put up 4 goals to give Neuvirth the win, and Minnesota lit up the scoreboard as well, but instead of the 2nd line (as was the case in Philly), Parise netted a hat trick and brought the Wild a victory. I played one lineup Wednesday, containing TOR1 and Markstrom in net, which went pretty well, but the Ducks were eviscerated by those same Leafs, so I wasn’t in contention at all. So let’s get right into Thursday’s matchups to see where we can find the cornerstones to our lineups.

For the ultra-elite of the NHL, the best time to target them, at least for tournament purposes, is after a couple of bad games. They didn’t suddenly become bad NHL players, you know? I said this last time, about Tyler Seguin, and it didn’t work out for us. I still believe it, however, and know Seguin will bounce back soon, and probably Thursday in a home matchup with Winnipeg. That is not the focal point of my process on this particular slate, silly as it may seem. Pitting the Caps and the Islanders in their first matchup since last season’s playoff battle between the two squads, the game in Brooklyn has the makings of a shootout. Each of the 3 games in New York last spring resulted in a very tightly contested, high paced game, with Washington averaging 31 shots per game. They continue to employ Alex Ovechkin, which is very useful data in determining who will take all these shots. Coming off two poor outings, where all Ovechkin produced was 6 shots and 2 shots with no points, many people will have a sour taste in their mouths. Don’t be one of those people to let your biases stay with you: Trust me, it’s hard, but it’ll pay off immensely in the long run. At $8.6k, you’d be crazy to pass up on Ovechkin. Check this out: over his last 4 games, he has attempted 15, 10, 22, and 6 shots. That is crazy, and he leads the league by a laughable margin in shots, so this absurdity shouldn’t even faze you, grizzled DFS veteran. As the old saying goes, you have to shoot to score, and you have to try to shoot in order to get DKPts for shots on net, and Ovechkin is in prime position to do just that.

This play is contingent on John Carlson remaining out of the lineup. However, it was reported today that he was unlikely to play until the weekend, leaving a gaping hole in the Capitals D-Corps. Niskanen has been the main beneficiary of Carlson’s absence, skating 32 min TOI and 27 in his last two games, both without Carlson and both resulting in 5 DKPt nights. Niskanen is slotted in on the PP1, kills penalties (with 5 blocks over the last two games) and makes for a fantastic play in all formats.

The DK scoring system doesn’t set up great for Kopitar, which is why I hesitate to use him in GPPs oftentimes, due to people targeting him on other sites due to his +/- excellence, and then seeing his relatively cheap salary on DK and blindly targeting him. He doesn’t give the same shooting volume as most of the other studs in the league, but some nights it won’t matter. I do think that this matchup is a great one for him, regardless of site. Toronto has actually been exceptionally strong lately, especially on offense (just ask John Gibson. Sorry to those who took him last night, I should have warned you TOR leads the league in high danger scoring chances over the last month). But don’t think LA will forget about the 5-0 beatdown they suffered at the hands of Toronto in LA’s last game of a 6 game east coast trip. They will be ready to go, and Darryl Sutter will do everything in his power to set up Kopitar and Toffoli for some offensive opportunities against an overachieving, but still talent barren, roster. There isn’t a single player or line that I think will be able to slow down the Kings cycle game, and playing on tired legs from their win last night, the Leafs should be quite vulnerable.

Toffoli is a really talented youngster who I feel goes overlooked too often, especially now that he is playing with Kopitar on the first EV line, in addition to his PP2 time. He is not afraid to shoot, as noted by his Corsi/60 metric that is good for 40th in the entire NHL. He will be set up for great looks against a Toronto team that simply does not pass the eye test when it comes to actual hockey talent. LA’s system should be enough to overpower Toronto’s, and Toffoli has the sort of game-breaking skill required to find the back of the net in this one. Side note: It’s amazing that I am now having to find reasons to pick players going against the Leafs, other than “it’s the Leafs” and moving on, but that’s simply life in the bizarre NHL.

It is quite ironic that while Jonathan Drouin is tied up in a huge debacle in Tampa, having just demanded a trade, Barkov, unpopularly selected one spot ahead of Drouin in the same draft, has gone off on a tear. He has 12 points over his last 10 games, good for a 4.9 DKPt/G mark, placing him in the elite tier of centers, for only a mid-tier salary. If there is one reason to worry, it is that although Ottawa gets those big green numbers in the “DvP” rankings (meaning bottom 10, and against all 3 positions), they have actually tightened up the ship a bit as of late, with their shot suppression trending upwards. Nevertheless, Barkov is next to unstoppable right now, and it is incredible to see the Barkov-Huberdeau-Jagr line performing so great alongside each other. They each make great plays in a good matchup.

Ekblad is a phenomenal talent, and although he may look like he’s been growing a playoff beard out for 10 seasons, he is still remarkably young. At age 19, he is still growing as a player, which could be an explanation for his decrease in TOI. After seeing a consistent 22-23 min/night D-man, with the obvious end goal being a Drew Doughty-esque 30 min/night expectation, Ekblad’s seen his minutes drop to 18-19 min per night. It’s puzzling, to say the least, but it is fair to say his production has dropped because of it, and will continue to struggle, until he sees more ice time. With plays like Niskanen out there, and even Nick Leddy at a cheaper price, defense can be found for the low $4Ks on this slate without too much of a problem, so I am much more hesitant to play Ekblad than I have ever been.

If you have any comments or questions regarding Thursday’s NHL DFS action, you can find me on Twitter @Mattman1398. Good luck tonight, and as always: