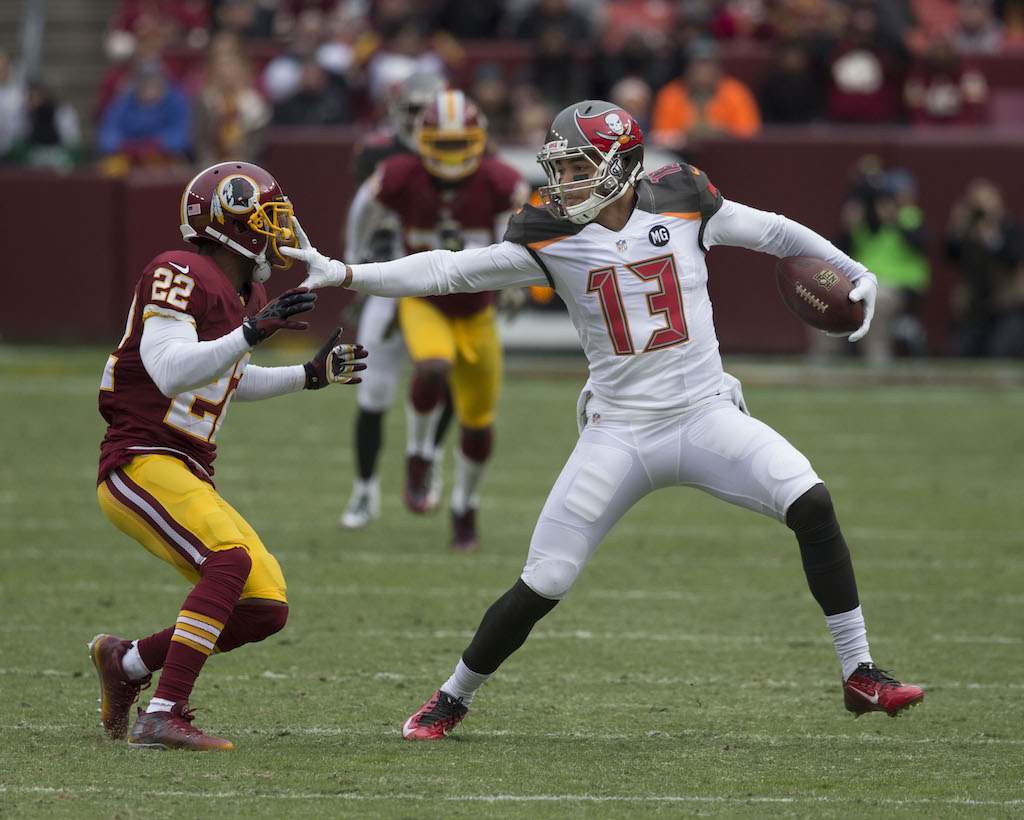 ($5700) Jameis Winston vs OAK | -1.5 TB, 50
Famous Jameis is at home, vs the leagues worst secondary, with a high game and team total. He is averaging 19.5 fantasy points per game and opens up salary to spend up at other positions. I have no issue with stacking Winston and Mike Evans in cash games.

($6,800)Spencer Ware @ IND | -2.5 KC, 50
Ware is not being replaced by Jamaal Charles due to complications with Charles’ return from injury and also because he has been plain #good. This is evidenced by his team leading 19 and 26 touches over the past two weeks while Charles has been active. While his price has creeped up to rival other top tier plays, he is being very efficient with his touches averaging 5.2 yards per carry and 19 yards per a catch. His matchup is excellent vs the Colts who have allowed the 8th most rushing yards per game and in the last 3, as well as the 4th most fantasy points to the position per game this season. The defense in the secondary isn’t great either and I expect the Chiefs to move the ball down the field repeatedly, creating multiple scoring opportunities for Ware.

($8,100)Mike Evans vs Oak | -1.5 TB, 50
The target floor that Evans has with Vincent Jackson on the IR is higher than any WR in the league. This was evidenced by his 13 targets last week which he parlayed into 8 receptions 96 yards and two touchdowns. This was his target floor and he may exceed it handily in a projected shootout vs the Raiders with terrible secondaries on each side. Oakland has allowed the 6th most DK points to the position.

($2800)C.J. Fiedorowicz vs DET | -2.5 HOU, 45
I tried to avoid writing up Fiedklsdmflnk, but tight end is extremely barren this week, and I don’t see myself being able to get up to Gronk in cash games. C.J. gets one the best tight end matchups in the league vs Detroit. The Lions have allowed the 3rd most fantasy points to the position and can’t seem to stop anyone on defense. C.J. Is getting some targets, averaging 7.5 over his last 3 games. He also has two touchdowns in that span.

($6,000)Carson Palmer @ CAR | -3 CAR, 48
This is a perfect bounce back spot for Palmer, who has seemed ineffective this year. Let’s not for get the 2015 season where he was the QB5 on the year and averaged 23.9 fantasy points per a game. This guy can seriously produce if he flips the switch, and he is facing one of the worst secondaries in the league allowing the 3rd most fantasy points in the league to the QB position.

($7,300)Christine Michael @ NO | -2.5 SEA, 48
Is there a player in fantasy that projects higher than Christine Michael this week? I struggled with whether to put Ware or C-Mike as the GPP play, but I think people will go down to Ware and Matt Forte as they are not used to paying $7,300 for Michael. This is a prime bounce back spot after Seattle’s week 7 tie with Arizona vs NO where I expect Seattle to generate a ton of offense. The Saints have allowed the second most yards per game and the team total is good at 25.75. Michael has 20 red zone touches although he has only been the workhorse back for 5 games. If you extrapolate that over 7 games he would have 35 and rank 3rd in that department behind only David Johnson and Melvin Gordon.

($7,600)Amari Cooper @ TB | -1.5 TB, 50
Tampa Bay has consistently presented a please pass funnel defense for us this season, and we are going to continue targeting it. Both mainstay Raider’s wideouts are great plays this week, but I believe if you want one, Cooper is the guy this week. Some think Crabtree may be a better bet for a touchdown in the red zone, but Amari is a better threat for a 60 yard bomb touchdown or two. In addition, I’m not sure Crabtree is the clear redzone guy, as he has only 1 more target than Cooper in that part of the field. His ownership will be lower than it should be in this GPP winning spot due to his only receiving 5 targets last week. I love this game, it is probably my favorite to shootout this week and I recommend game stacking it.

($6,100)Jimmy Graham @ NO | -2.5 SEA, 48
This is new for me. I have never written up Graham in my life, but biases aside he is an amazing play this week. He is averaging 9 targets over his last 4 games and faces the Saints atrocious secondary, allowing the 4th most passing yards per game. I would not play Jimmy Graham in cash games, however, as the Seattle pass game can be hard to predict, he can disappear at times, and Seattle is averaging only 254 passing yards per game.