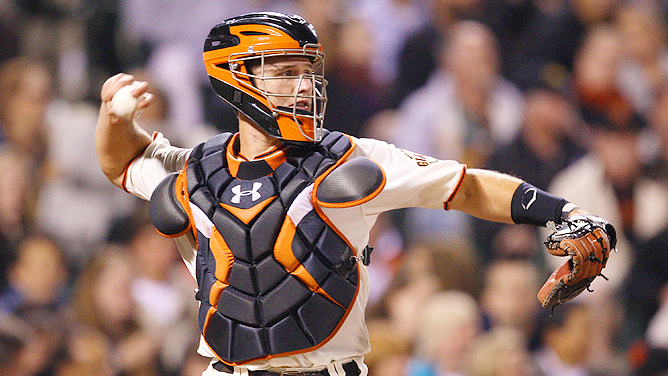 We continue our statistical breakdown of every position as we get ready for the 2017 Major League Baseball All-Star Game. We previously ranked the pitchers and now we focus on catchers and center fielders.

We will be using Felipe’s Ultimate Baseball Advanced Rankings (or FUBAR for short–a ranking system that utilizes advanced stats almost exclusively) to rank the pitchers, both starters and relievers.

A lot of stats were used for this exercise, but the method remains the same. Players were awarded points based on where they finished in each statistical category. Only the top 15 pitchers in each category were considered. If a pitcher finished first in a stat, he would be awarded 15 points, second received 14 points, third got 13 points, etc.

We try to gauge a player’s hitting prowess, plate discipline, base running, and fielding. Here are some keys to the following charts:

The calculation used for our defensive rankings is: UZR + DRS divided by two.

Our “hitting” stat is measured by the sum of the following stats:

Weighted On-Base Average (wOBA): Per fangraphs.com, it is “one of the most important and popular catch-all offensive statistics” that is based on the idea that “not all hits are created equal.” The function of wOBA is to truly capture offensive value of a “player’s production at the plate.”

Weighted Runs Created (wRC): A stat that measures a player’s total offensive value by measuring it in terms of runs.

Weighted Runs Created Plus (wRC+): Like wRC, but with league and ballpark factors included in the calculation. Anything below 100 is bad, anything above 100 is good.

On-Base Percentage (OBP%): Not exactly an advanced stat, but not a traditional stat either. It falls somewhere in between. Basically, this stat tries to measure the rate a player gets on base.

Unlike other stats, such as WAR, FUBAR attempts to incorporate a player’s “plate discipline,” with the goal of attempting to award players who can draw walks and limit strikeouts. The following stats are used for this calculation:

Walk to Strikeout Ratio (BB/K): Number of walks taken by a hitter divided by strikeouts.

For this exercise, the formula used is BB%+K%+BB/K divided by three.

Our base running metric uses the following two stats:

The formula used for this metric was wSB + UBR divided by two.

The sum of all these parts is labeled here as we add up the fielding, hitting, base running, and plate discipline metrics.

Now that you know how this works, let’s take a look at the rankings:

Not much of a surprise here as Buster Posey has basically been the best catcher in baseball for a while now. But obviously, it’s his hitting prowess that really displays his value.

Admittedly, a big surprise was seeing J.T. Realmuto ahead of Salvador Perez. Regardless, Perez shows once again why he’s the best catcher in the American League.

Speaking of surprises, Aaron Hicks has had a remarkable season so far. Everybody knows he has a strong outfield arm, but the biggest shocker here is that he’s been holding his own with the bat as he’s helped with the New York Yankee resurgence of 2017. Hicks beats out established mainstays like Lorenzo Cain and George Springer.

Over in the National League, Charlie Blackmon once again shows his dominance at this position as he roughly has a nine-point lead over Dexter Fowler.

This article is dedicated to my friend and Angels’ superfan, Octavio Mendoza who passed away recently. Would like to thank him for the constant support and words of encouragement, but most importantly for being a friend. I will miss our talks and your wacky sense of humor. Sorry about Mike Trout not qualifying for the center field rankings. Rest forever in peace.