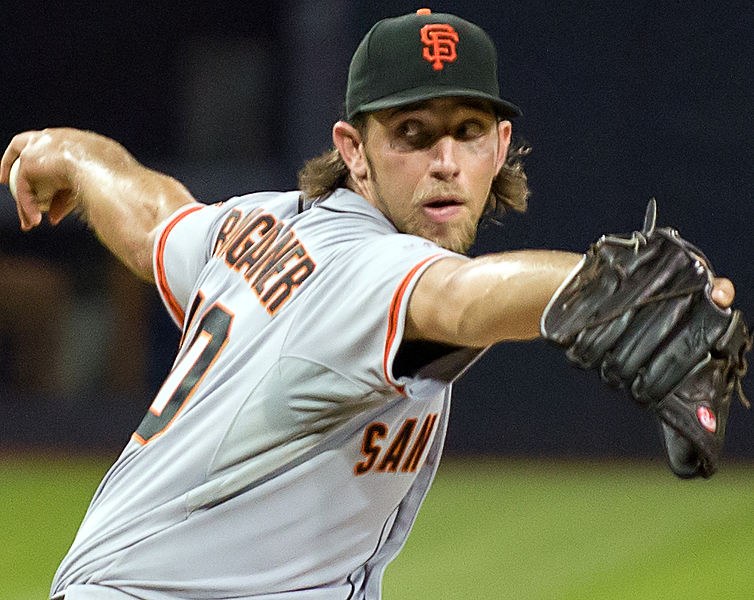 There will be no shortage of strikeout pitchers on Sunday, as some fantastic matchups are in the works. Staff ‘aces’ are throwing against weaker offenses, and high-strikeout arms will meet – miss – high-strikeout bats. Unfortunately, weather appears bound to play a factor in Sunday’s games.

Madison Bumgarner –After trending below their projected offensive output at the start of the season, the Mets have not only completely recovered, but moved the scale in the other direction. After nineteen combined runs in their last two games, the Mets are bound to slow down, and Madison Bumgarner stands as the most likely catalyst. The Mets still strike out at a high enough rate to make Bumgarner’s projections excellent, and the southpaw he has the added bonus of countering left-handed hitters Lucas Duda and Michael Conforto.

Clayton Kershaw – It is more of the same for Clayton Kershaw. The stud pitcher is always a target, but moves into the top tier when the matchup is in his favor. Against the Padres, the day after back-to-back outings where the team scored at least five runs, Kershaw is tasked with playing the role of ‘stopper.’ Once the concept of a rebound game is thrown into the mix – despite ten strikeouts, Kershaw allowed five earned runs in seven innings in his last start – Kershaw becomes one of the top plays of the day.

Vincent Velasquez – All it took was a few mediocre outings to erase the memories of Vincent Velasquez’s ridiculous start to the season. Velasquez has struck out eight combined batters over his last two starts – fewer than any one his first two, individually. His season numbers remain inflated due to the small sample size, but Velasquez’s season-long projections are still high enough to consider use against any strikeout-prone offense. The Indians fit the mold, and Velasquez is ready to take advantage.

Rich Hill – How much more is needed before we can buy into Rich Hill? His strikeout rates are absurdly high, but so are his averages over the past few seasons. Simply put, Hill does legitimately strike out enough batters to justify his use, but the ever-present explosiveness of the Astros warrants caution. Thankfully for Hill, he will be throwing in a pitcher-friendly ballpark and should continue to build on his early-season success.

John Lackey – Saturday’s rainout pushes John Lackey’s start into Sunday, and the extra day of rest should only help in what is already a favorable matchup. The head-to-head comparison between teams is outrageous, as the Cubs are as good as the Braves are bad. Both Lackey and Atlanta’s strikeout rates are decent – neither great nor terrible – but the low-scoring environment and likelihood for a win makes Lackey a solid play similar to Jordan Zimmerman’s setup on Saturday.

Danny Salazar – Once again, the Phillies provided their typical production on Saturday, winning a game despite scoring four runs. This is a trend for Philadelphia, as the team explodes as rarely as it gets completely shut down. Strikeouts remain attainable, and Danny Salazar is the next Cleveland pitcher attempting to reap the rewards. The floor is high for the aforementioned reasons, but the ceiling is dependant upon just how stubborn the Phillies’ offense is while trying to close out a series sweep.

Giancarlo Stanton/Paul Goldschmidt/Mike Trout – Despite the obvious change in starting pitcher from Saturday to Sunday, some of the top targets remain in play. Most notably, Giancarlo Stanton – still in the bandbox that is Milwaukee’s Miller Park – Paul Goldschmidt, and Mike Trout are three of the obvious choices for Sunday. Trout’s matchup is the toughest, as he faces Cole Hamels, but the Angels were shut down for eight innings on Saturday and should put forth a better effort on Sunday.

Edwin Encarnacion/Jose Bautista/Troy Tulowitzki/Josh Donaldson – Jake Odorizzi has been hit-or-miss in his first five starts – two games in which he has allowed four or more runs and three games in which he has allowed one or fewer. He is one of our better pitching targets of the day, but his inconsistency puts Edwin Encarnacion, Jose Bautista, Troy Tulowitzki, and Josh Donaldson on radar from the hitting side of the game. More accurately, Odorizzi is actually much better against left-handed hitters, and is prone to get hit by right-handed bats.

Carlos Gonzalez/Charlie Blackmon – Carlos Gonzalez has been a favorite of the chart for quite a while and, even though he has delivered a decent amount of fantasy points, he only has four home runs on the season. Shelby Miller gets hit incredibly hard by left-handed bats, and Gonzalez and the now-healthy Charlie Blackmon should thrive on Sunday.

Left-handed Cubs Hitters – As ideal of a matchup it is for lefties against Shelby Miller, left-handed hitters should be even more excited to face Julio Teheran. The right-handed pitcher puts all left-handed bats on the map, as he has been a gift to them, all season. Anthony Rizzo is the obvious player to watch, but Jason Heyward – still without a home run – Ben Zobrist, and Dexter Fowler are among the best plays of the day.

Justin Bour/Derek Dietrich – Justin Bour and Derek Dietrich often get lumped together in both salary and expectations, as their playing time and lineup positions are somewhat inconsistent. The same is true for Sunday, as both are relative bargains for their projections against the right-handed Wily Peralta in a hitter’s ballpark, and either can be used to save some salary.

Travis Shaw – Travis Shaw shined without David Ortiz in the lineup during one of the team’s two games in a National League ballpark, and the left-handed hitter should continue his success against Nathan Eovaldi on Sunday night. Oddly enough, Shaw’s personal numbers against right-handed pitchers is worse than against southpaws, but Eovaldi helps settle the imbalance. Regardless, Shaw’s price is excellent for his projections.

Kyle Seager – Kyle Seager quietly has five home runs on the season, despite an atrocious .159 batting average through April – evidence of his struggles is the fact that Seager, a legitimate breakout candidate from the preseason, is on the list of bargains. Amazingly, the .159 average is an improvement, as Seager has five hits – three of which were home runs – in the last six games. Buy now, while Seager is rising.