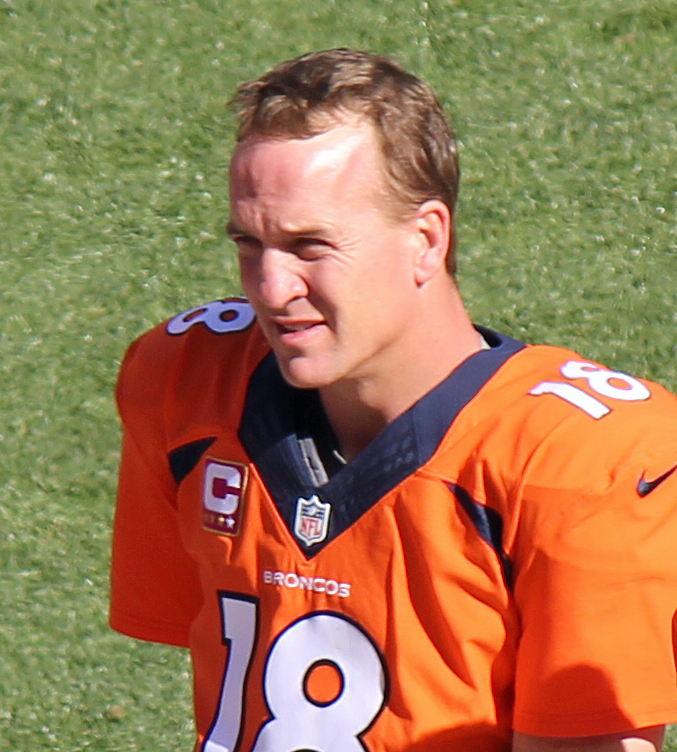 Super Bowl 50 came in like a monsoon and finished like a drizzle. The game was good, but it could have been better as the Denver Broncos dominated the Carolina Panthers 24-10. Here are some random thoughts about the event from Sunday.

Commercials were once again underwhelming, but anything produced for this year is a lot better than what was shown in last year’s big event. So that’s a win for advertisers, I guess. Maybe.

It was incredibly odd for the telecast to constantly show us views of beautiful San Francisco when the game was being held in Santa Clara, CA. That’s basically a one-hour trip from AT&T Park to Levi Stadium. Where were the aerial shots of Santa Clara’s skyline?

On The Men Up North Podcast, we facetiously mention how every 15 years, the NFL develops a defense that is so good, that it becomes one of the best units of all time. There was the 1985 Bears, the 2000 Baltimore Ravens, and after Sunday’s other-worldly performance, we now have a legit argument for the 2015 Denver Broncos. Feel free to agree or disagree in the comments’ section below.

Just like it was a bad omen when Peyton Manning saw a snap go over his head to start the game in the Super Bowl two years ago against the Seattle Seahawks, Cam Newton getting stripped-sacked by Von Miller should have given people the same, uneasy feeling about the Panthers’ chances in Sunday’s game.

It’s amazing, in a league where offense gets all the calls and the rules bent their way, the old adage about defense winning championships still prevails. And in a league where quarterback development simply cannot keep up with demand, it might be time for teams to put more of an emphasis in building up a stout defensive unit than continue to chase after quarterbacks who may or may not pan out.

Speaking of quarterbacks, immediately after the game, fans went on social media, asking out loud if Manning now cements his legacy as the greatest quarterback of all time.

Manning isn’t even the best quarterback of all time within the Denver Broncos’ organization. The answer has always been and will always be John Elway. Better physical tools, better mobility, better arm, doing more with less all adds up to Elway being better than Manning. And in a hypothetical scenario where I get to build my team with any quarterback from the past, I’m picking Elway every single time. There is no other conversation to be had.

John Elway was drafted first overall by the Colts’ football organization only to finish his career with the Denver Broncos.

Peyton Manning was drafted first overall by the Colts’ football organization only to finish his career with the Denver Broncos.

I cannot wait to see what Andrew Luck can do once he eventually makes his way to the Denver Broncos.

I know what you’re thinking, “what about Jeff George?” He would later be reincarnated as Chicago Bears’ quarterback, Jay Cutler.

Getting back to the Broncos’ defense, that was a clinic they put on NFL MVP Cam Newton and the Panthers’ offense. They made Newton look like the 2015 version of Peyton Manning and the 2015 NFC Championship version of Carson Palmer, the vaunted rushing attack of the Panthers was nullified (aside from maybe one possession), and Greg Olsen had very little room to maneuver on Sunday as he ended up with pedestrian numbers.

Newton had to depend on guys like Corey Brown and Ted Ginn to bail him out in the passing game. We’ve talked about Carolina not having much of a receiving threat outside of Olsen throughout most of the season and the Broncos sure did exploit that weakness in the Panthers’ offense.

Speaking of Corey Brown, his new claim to fame was not in the fact that he led all Panthers’ receivers in receiving yards in the Super Bowl (80 yards). It’s the fact that he somehow got under Aqib Talib‘s skin. Who knows what exactly was said between the two as both men were jawing at each other for a big chunk of the first quarter.

But it was Talib who was visibly jacked up. Really jacked up. So jacked up, he got one personal foul penalty, instigated by Brown and when Brown beat Talib on a crossing pattern later in the quarter, Talib finished the play by tackling Brown by the facemask. Personal foul number two on Talib. Had the Broncos managed a way to lose this game, there would be no doubt that Talib would have been the scapegoat of the game.

2015 Fantasy football bust, C.J. Anderson finished with 27 touches for 100 combined yards and a touchdown. Where the hell were all these touches and production during the regular season? What gives Gary Kubiak?

Speaking of Kubiak, I thought I would never say this in my life, but here it is: Gary Kubiak is a coaching genius. He won the championship so now he gets to be called a genius and a coaching great. What an odd world, right?

But the win justifies everything John Elway did a few years ago. It started by trading for Peyton Manning and then shipping “special teams” extraordinaire Tim Tebow to the New York Jets’ bench. And then he fired John Fox and brought in former teammate Kubiak to take over in Denver. Getting rid of the popular Tebow and a winning coach in Fox were probably questionable moves at the time, but in the end, this is all about winning and Elway and Company finally got over-the-top and won their third Super Bowl trophy.

Have I mentioned that John Elway is the greatest NFL quarterback of all time yet? Because he is; fact.

No Super Bowl halftime show will ever come close to Prince summoning purple rain when he performed his song “Purple Rain” at Super Bowl XLI. In Super Bowl L, they tried going the quantity over quality route and it sort of fell flat for Coldplay, Beyonce, and Bruno Mars.

Regardless, it was a solid show, just not one of the best I’ve ever seen. Seeing Bruno Mars again after watching him perform only two years ago was sort of odd. Beyoncé was captivating as always, but her performance, especially her vocals, were pretty lackluster considering how good her individual Halftime Show was in 2013. But the fact that they needed two recent performers of these Halftime Shows to complement an act like Coldplay really show how dubious the selection of Coldplay really was to perform on the biggest television music stage known to mankind.

So even though Coldplay was not impressive from my television screen, the actual show was pretty cool. Of course, being hosted in “San Francisco,” the perceived hub of gay rights and movements of America, it was fitting to see a lot of rainbow-themed aesthetics cover the entirety of the Halftime Show stage. But the other thing that I got out of this performance was how “retro” the whole thing felt.

Northern California is known for the psychedelic, carefree aesthetic that was popularized back in the 1960s. Seeing all those rainbow-themed props being twirl around did sort of feel like Grateful Dead or Blue Cheer concert/performance (or like Wizard of Oz), but done with a mainstream audience in mind. So in retrospect, maybe the performance by Coldplay was not all bad as they may have saved themselves a bit with their homage to the region’s past musical history.

Speaking of homages, Beyoncé paying tribute to Michael Jackson was pretty cool. And I’m not even a Michael Jackson fan, but Jackson’s Super Bowl performance was the first one I ever experienced, so a little bit of my childhood was giddy when I saw her get-up at SB 50.

Finally, a sore spot for me in how people have reacted to Cam Newton leaving his post game press conference after only a few questions where he pretty much was surly. Many fans took to social media to share their anger and disappointment at Newton for not being “man enough” or “lacking professionalism.” My question is, since when do people care about “post-game press conference performance?” Last I checked, when quarterbacks are scouted for the NFL Draft, mic skills are not an attribute being measured. This isn’t the WWE.

The way I see it, Newton showed up so he wouldn’t get fined (hat tip to Beast Mode), met his Collective Bargain obligation by taking a few questions from the media, and then left because press conferences are not that important, especially to the team that just lost the biggest game of the season.

What’s important is how he took the loss in front of his coaches and peers. Anything else he would have shown us in front of the media would have been gravy, but it’s the Super Bowl and a lot of us were stuffed with Super Bowl overload (and nachos, pizza, and buffalo wings drowned in lost of beer). Seeing Newton spew out clichés and predictable answers would not have done any of us any good. The only ones who should really be mad should be members of the media in attendance at said press conference because now they have to scurry quickly for a storyline they could send to their editors before deadline.

Many people have pointed out to the “lack of class” from Newton. Over walking out on a press conference? Are you kidding me? Is this real life?

People forget that Newton is coached by Ron Rivera who encourages their players to act like and be true to themselves. So if anything, blame the coach for not placing and important emphasis on post game press conferences. But as mentioned, what’s most important for the Carolina Panthers is how Newton addressed his team after the loss. Behind closed doors, away from media access.

To me, professionalism and class is not defined by how a player performs in press conferences. We don’t pay these athletes millions of dollars to impress members of the media. Yes, it is part of the job of being an NFL player, but it’s not as if Newton completely skipped the post game rendezvous with the media. He was there, physically and literally. But his heart and mind were anywhere but there. If anything, he did the general public a favor by bolting. I rather see a happy Cam than a sad Cam up there anyway. If I wanted to see and hear someone be gloomy, I’d listen to my old Taking Back Sunday records.

Let’s keep in mind that this is the same league that allows child abusers, women beaters, and overall some of the worst human beings to make sure they are ready to play on Sundays (and sometimes Thursdays, Saturdays, and Mondays). The league has shown an inability to consistently punish players for their off-the-field behavior. So please excuse me if I don’t take a player bailing out on a post-game press conference as seriously as other people do. Compared to the bigger picture, it’s pretty asinine to go after a player who has been a model NFL citizen.

The only thing that should matter is how his teammates and coaches think of him. And seeing how this is the Super Bowl, his opponents’ respect is also more important than a post game press conference. Even Peyton Manning said that Newton was very humble when they met in the middle of the field after the game was decided. And here are pictures of a happy Cam Newton congratulating Peyton Manning on the field.

So lesson learned, Cam Newton showing class and grace to an opponent is more important than showing it to members of the media. And John Elway is the greatest quarterback in NFL history.