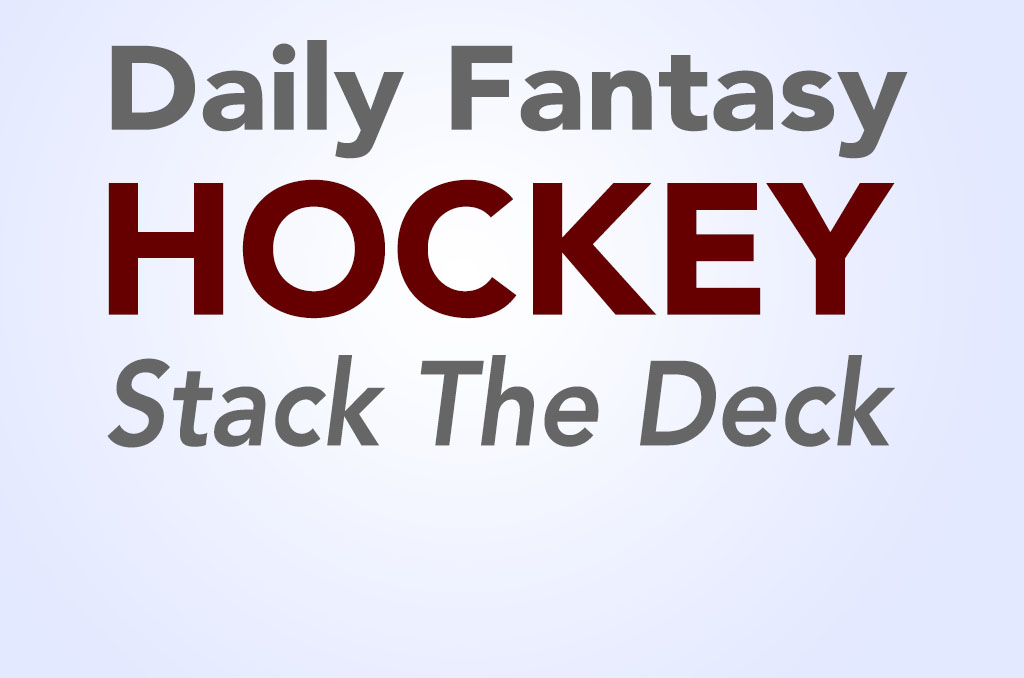 Welcome to Stack the Deck, where we focus on the key players in action on February 8th across the industry, and determine whether they should be played with a teammate, or ridden individually. Stacking is a common tactic in NHL, with linemates and power play units staying relatively stable throughout the course of a game, and to a smaller extent, a season. Here are a few players I am targeting on Monday’s four-game slate, and my thoughts on who to play with them in order to stack the deck in your favor.

Player Matchups are gathered from HockeyViz.com

After a moderately entertaining Super Bowl, we can officially close the books on the NFL. We are now entering the greatest time of the year for sports, with NHL, CBB and NBA action in full swing, and PGA, NASCAR and MLB all ramping up in the near future. It’s a great time to play Daily Fantasy, but with all these sports means lots of opportunity to win big, or lose big. It’s essential to focus your bankroll only on the sports you feel comfortable with, or can find reliable information on. Throwing a lineup a day into a sport you don’t know may seem harmless, but (trust me I know) it adds up quick, and it can draw from your account quicker than you can gain the money back in your favorite sports. That said, there are plenty of good resources for NHL tips and strategy, and I hope that you find this useful to you in your NHL DFS lineup construction process.

**DraftKings Prices will be used, however there are some other sites that have very similar scoring systems to DraftKings, so if you play on OwnThePlay or FantasyHub (or any site with shots, goals, assists, and blocked shots making up the substance of the scoring system, and no +/-), this writeup will be useful to you as well. Stay tuned for the FantasyHub Lock of the Night later on in the post!**

**Injury News: Rick Nash, Ryan McDonagh, Mike Cammalleri, Mike Green, and Evgeni Malkin are confirmed OUT for Monday’s action, so make sure you 1) don’t play those players and 2) take advantage of the players set to benefit from an increased role.**

Hedman has finally become the featured Defenseman on the TB Powerplay, but it has oddly come at the expense of Steven Stamkos. In their last couple of games, T.B has used their nominal PP2 of Killorn-Johnson-Kucherov with Hedman and Palat almost twice as often as Stamkos’ unit. While Tampa Bay has a fantastic matchup with an Ottawa team that ranks 2nd to last in both Corsi and scoring chances against, Stamkos is not a player I am strongly considering on tonight’s small slate. His main weapon, the PP one-timer from the left faceoff dot, has been effectively neutralized not by the opposition, but his own coach. While he has extreme upside in any matchup, I like the savings that the PP2 unit gives, while playing PP1 time.

Victor Hedman skates on the top EV pairing with Anton Stralman, and plays roughly 33% of PK time and 60% of PP time for the Lightning, consistently skating 22 minutes per night. Hedman is the 3rd best defenseman on the slate in terms of iCorsi/60, and is a generally safe bet to generate points in all facets of the game. In his last 10 games, Hedman has racked up 9 points, 25 blocks, and 26 shots on 45 shot attempts. While everyone flocks to Karlsson and Letang at defense in much tougher matchups, bank on Ottawa’s 2nd worst DvP and Hedman’s recent form to produce a great night for Tampa’s top defenseman.

Killorn is a member of the streaking 2nd line in Tampa, who have combined for 10 points in the Lightning’s last 2 games. He is priced much cheaper than Tyler Johnson and Nikita Kucherov, his linemates, while posting very similar rate stats to them. Over their last 10 games, Killorn has put 41 shots towards the goal, while Johnson and Kucherov have attempted 42 and 46 shots, respectively. I love the trio as a stack because of this, especially since their TOI has been abnormally low in accruing these stats, so as their ice time returns to normal they should only improve. If I have to choose one for my cash games, however, I will definitely take the savings on Killorn and count on him pitching in to his line’s production in this cupcake matchup.

Getzlaf may have finally turned the corner on what looked to be a lost season. The Ducks have been outstanding, winning their last 6 games and taking on a Penguins team missing Evgeni Malkin. I foresee the Ducks doing everything they can to put Ryan Kesler on Sidney Crosby, which I believe takes both players out of cash consideration. Outside of Crosby, the Penguins are unfathomably bad, so their depth players can be exploited, which is why I am more interested in Getzlaf than Kesler. Getzlaf comes into tonight with 10 points in his last 10 games, and 20 shot attempts in his last 4 games, showing an offensive floor that just hasn’t existed yet this season. However, I think he and David Perron, the former Pen traded for Carl Hagelin last month, will hook up for a goal, so look for Getzlaf as the safest bet on Anaheim to meet value.

A great GPP option on tonight’s slate is Cam Fowler, who has recently found himself on the PP1 unit with Getzlaf, Perry, and Rickard Rakell. His stats haven’t necessarily improved, but there is a strong indicator of a future breakout: He has attempted 15 shots in just the last two games, showing that he his offensive involvement has drastically increased, and for $4,000 he is a great stacking option to gain exposure to both the ANA first D pairing and PP unit. If he finds himself targeted by Crosby, he has shown an ability to block shots as well, so his individual matchup shouldn’t impact his output too much.

Datsyuk and Zetterberg have been reunited, meaning there should be plenty of fantasy goodness in this matchup with the typically slow-paced Panthers. Over their last 3 games, they have given up upwards of 35 shots in each, including 39 to the Red Wings on Thursday. I think Datsyuk and Zetterberg will find instant chemistry, and on the line chance Datsyuk said “It’s like holiday.” He’s pretty excited to play with his old friend, and although the PP lines have not been changed on Daily FaceOff, I expect Datsyuk to slide up to the PP1 with Zetterberg and Abdelkader, since they will play together at 5v5 anyways.

Kindl was recalled to replace Green, who is out with a groin injury. This leaves a hole in the PP structure, and Kindl is actually the one projected to fill it. Paired with Brendan Smith, who has played 18-20 minutes per night recently (and probably more with Green now out), and potentially Zetterberg and Datsyuk on the PP, Kindl is as good of a value as you’ll find on tonight’s slate. I will plug Kindl in and use that salary to spend up on guys like Hedman, Karlsson, and King Henrik Lundqvist in net for NYR in a 4.5 projected O/U game.

If you have any comments or questions regarding Monday’s NHL DFS action, you can find me on Twitter @Mattman1398. Good luck tonight, and as always: