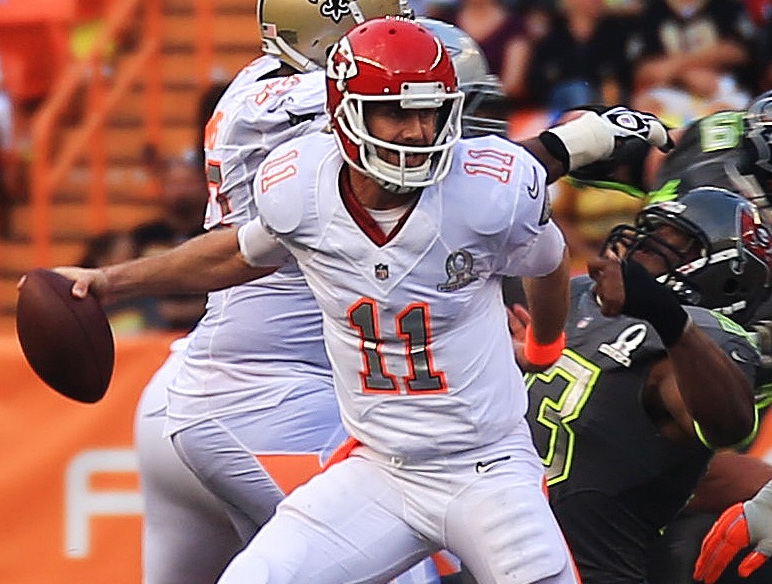 Despite an early morning game removing one from the slate, Week 7 is packed with interesting matchups. Unfortunately, many of such games afford better opportunities for the entertainment angle, with a handful yielded excellent fantasy options. In addition, there are a large number of high upside plays, as offenses appear ready to break out after weeks of stagnation.

We are also treated to a combination of ‘revenge games’ and divisional showdowns. More than ever, Week 7 appears more dependent upon game flow than matchups, which plays right into the hands of what we target most.

Sporfolio’s NFL Daily Fantasy Sports game-by-game analysis columns are driven by expected game flow. Based on a combination of our Week 3 NFL picks against the spread and our expectations for a given game, we project the actions necessary to make these picks come to fruition. We aim to pinpoint players integral to our predicted game flow for each game of the week.

Luke’s DFS Take: The Chiefs are one of my least favorite fantasy football teams with one of the best matchups imaginable. While Alex Smith is almost always solid, he rarely puts up numbers that are desirable for fantasy purposes. This limits the upside of his skilled pass catchers, Jeremy Maclin and Travis Kelce. The only reliable part of Kansas City’s game is its desire to run the ball. Unfortunately, with Spencer Ware proving he deserves touches, Jamaal Charles fully healthy, and Charcandrick West still likely to be somewhat involved, this backfield is too difficult to predict. The Chiefs will have to put up points to keep up with the matchup-proof Saints led by Drew Brees and Brandin Cooks. The problem is knowing which player will be responsible for Kansas City’s points. For this reason, I am only leaning towards New Orleans’ combination of Brees and Cooks.

Mario’s DFS Take: The Saints are a gift to fantasy football. Even when their matchup appears difficult, they don’t deviate from the plan of trying to bludgeon opponents through the air. Because of this commitment, we can safely roll out Drew Brees and Brandin Cooks, even though the Chiefs’ scoring defense is tenth-best in the league. After all, the pass defense ranks in the lower half of the league for net-yards-per-attempt. Kansas City’s offense is intriguing solely due to the Saints’ horrible defense – second-most yards and most points allowed – with Alex Smith presenting a nice upside play. With too many running back options, Smith is the player from Kansas City to target, especially since many of the Saints’ games develop into shootouts.

Luke’s DFS Take: In terms of quality of opponents, Sunday Night Football is one of the best matchups of the week. The Seahawks’ defense has been dominant, all year, and the offense has been rolling along nicely. The Cardinals hit a bit of a speedbump out of the gate to start 2016, but remain one of the most talented teams in the league. With a huge divisional battle afoot, there will be no ‘letdowns’ in competition. From a fantasy perspective, when both teams are operating at their best, it is likely in the form of stellar defense. Despite playmakers on both offenses, the two defenses will likely control the game. Based on volume and potential, both David Johnson and Christine Michael need to be considered, but with tempered expectations due to comparatively poor matchups.

Mario’s DFS Take: I absolutely love the NFC West showdown for entertainment purposes, and I found it had one of the most interesting storylines when I wrote about it in my picks article – specifically, my expectation that Arizona exploits a Seahawks’ secondary that will absolutely be scrutinized by the officials. Unfortunately, if this were the case, the yards gained through more penalty flags won’t help anyone for daily fantasy purposes. What a shame. At least, the deep pass attacks by Arizona should come to fruition, and quarterback Carson Palmer is more than capable of connecting on a few, making him a high-upside target in Primetime slates. Unfortunately, the list ends there for full-day contests, as both defenses rank in the top-ten for yards allowed. Doug Baldwin and Jimmy Graham – if he’s not ‘back,’ he’s certainly on his way – also make sense for Primetime lineups.