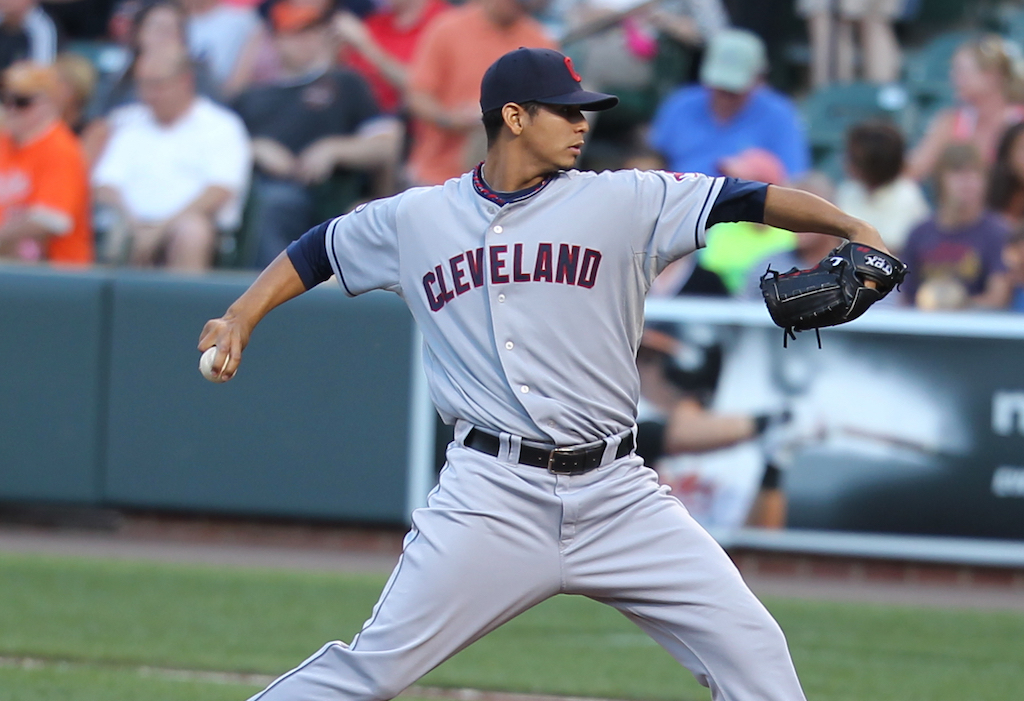 Controversy ran rampant the day I released my 2015 FUBAR rankings (a.k.a. Felipe’s Ultimate Baseball Advanced Rankings–a look at baseball from exclusively a sabermtrics’ point-of-view) for the top starting pitchers in Major League Baseball:

Guess I forgot to share this here. #Top25 starting pitchers of 2015, per #sabermetrics#pitcherscatchersreportpic.twitter.com/RSKCCWPdUi

Many baseball fans were left perplexed in my most recent article where I had listed Cleveland Indians’ hurler, Carlos Carrasco as the sixth best starting pitcher in baseball, while Cy Young candidate Zack Greinke wound up ranking 10th overall in these individual standings.

For those not familiar with how FUBAR measures pitching performance, we award points to the top 25 pitchers who ranked in two advanced pitching statistics:

FIP is a better, more accurate substitute to Earned Run Average (ERA). FIP, at its most elementary, creates a hypothetical world where a pitcher does not have to worry about random factors that affect his production or performance, such as defense and luck.

So with that in mind, we now try to figure out why the advanced stats liked Carrasco more than Greinke.

Greinke posted a Zone Percentage (pitches thrown inside the strike zone) of 40.4 percent, as he tried to entice opposing hitters to swing at pitches that painted the corners. Carrasco was not too far off with a Zone Percentage of 42.0 percent.

Despite the similar Zone Percentages, Carrasco did a much better job of inducing more swings, especially outside the strike zone, where Carrasco had hitters swinging 40.1 percent of the time, while Greinke was at 34.0 percent. Carrasco also had the higher Swinging Strike Percentage (14.0 to 12.0 percent).

The harder stuff and the emphasis on missing bats also gave Carrasco a lower Contact Rate (72.9 to 74.8 percent). This was most noticeable in Contact Rate outside the strike zone, where Carrasco finished 11th overall among all qualifying pitchers (Greinke was ranked 20th).

Now this is where it gets very interesting. Where Carrasco had the better Plate Discipline Percentages, Greinke appeared to have the better batted ball figures. Greinke finished seventh overall in Soft Hit Rate (21.7 percent) while having a higher pop up rate and Home Runs Per Fly Ball Percentage as well.

Carrasco had a higher Ground Ball Rate, finishing 18th among all qualifying starting pitchers (Greinke finished in 31st, 51.2 vs 48.0 percent). Like most ground ball pitchers, Carrasco had issues with keeping his fly balls inside the ball park. Carrasco had the 12th highest Home Runs per Fly Ball Percentage last season. Of the top 15 pitchers in this stat, nine would finish with a Ground Ball Rate above 48.0 percent. It’s what most ground ball pitchers do.

Even more interesting is the Fly Ball Rate (FB%) for Carrasco, which falls below 30 percent (Greinke was at 32.9 percent). We mentioned before that Greinke had the better pop up rate (9.3 vs 6.6 percent). Of the 29 pitchers with a FB% below 30 percent, 18 of those pitchers finished with a pop up rate below 9.0 percent.

So Carrasco ended up being an extreme ground ball pitcher, while Greinke had a relatively slight variance to his batted ball distribution and also had the better luck.

Not surprising, Zack Greinke finished with a low .229 BABIP (Batting Average on Balls in Play), good enough to rank him second overall in this category. Based on his batted ball distribution, it makes sense how he was able to maintain a very low BABIP. Greinke’s career BABIP currently stands at .298 and his previous low was .267, posted in his rookie season in 2004. Carrasco would finish with a BABIP of .304. After seeing his batted ball stats, it makes plenty of sense why his BABIP was higher than Greinke’s.

In terms of the traditional stats, the low BB% helped Greinke lead the league in WHIP and ERA and finished with a higher Walk/9 Innings (BB/9 of 1.62 vs 2.11). Naturally, Greinke being on the better team helped him accumulate 19 wins (compared to Carrasco’s 14).

In the most basic of explanations, the advanced stats are “penalizing” Greinke for his luck in terms of batted balls, while giving Carrasco more slack for his misfortune and perhaps having a worse defense behind him for most of the season.

And this is why Carrasco was ranked sixth in FUBAR and Greinke was 10th. The fact of the matter is, they’re both elite pitchers who have different ways of eating up innings and giving their respective teams the best chance to win games. Nevertheless, I did provide a second chart for those fans wanting to see how pitchers ranked in terms of ERA and WHIP:

For giggles, this is top #startingpitchers of 2015 based on ERA + WHIP #baseballpic.twitter.com/teUBuqZ8b8

Here’s the tale of the tape according to Steamer Projections at fangraphs.com:

Carrasco wins every stat except for Walk Percentage as Steamer assumes that Greinke will continue to paint the corners and showcase extraordinary control. Nevertheless, the projections like Carrasco and think his 2015 season is a sign of greater things to come for 2016.