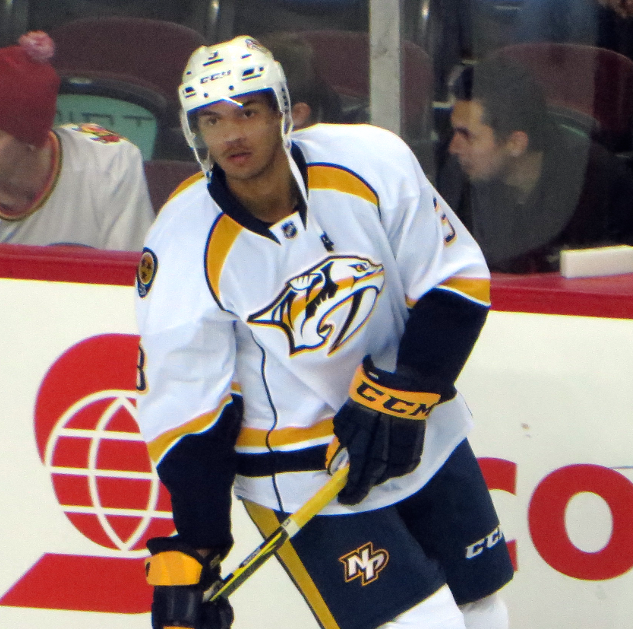 It was an incredibly slow start to the NHL season with regard to the trade market. From October 7th through December 13th, there was exactly one trade in the NHL, and it was goaltender Kevin Poulin going from Tampa Bay to Calgary for future considerations.

There are a number of reasons why, including salary cap issues for many teams along with not wanting to be that team that traded the next Filip Forsberg, but regardless of circumstance, nothing was happening.

[RotoQL is an all-in-one daily fantasy toolkit to help lineup building be faster and more enjoyable. Sign up today]

That all changed in the weeks leading up to the roster freeze for the holidays, and even more so after that. Here is the fantasy slant on some of the bigger trades that have gone down.

Ryan Johansen traded by Columbus to Nashville for Seth Jones

The biggest one was obviously the trade of Johansen for Jones last week.

There have been rumblings for a long time that Johansen may be on his way out, what with his recent contract issues and the team’s season-long losing skid. With Columbus essentially out of it for the season as far as playoffs are concerned, it seemed to make sense to trade their biggest trade chip to improve a glaring weakness: their blue line.

Despite a down year this year, Johansen has already done something in his career that only a handful of elite players have done since 2010:

Anyone that drafted Johansen in fantasy leagues can tell you they were probably expecting another 70-point season, and has been disappointed so far. Even in a down year where everything has gone wrong, though, Johansen is still on pace for 55-60 points. That should give a solid indication of just how good he really is.

Even with a down first half to this season, Johansen is still among the most productive in the NHL over the past two and a half seasons: Johansen is among the top-30 forwards in points per 60 minutes in all situations since the start of the 2013 season at 2.60 (minimum of 2000 minutes played). Ahead of both Sedins, Jeff Carter, Max Pacioretty, and tied with Zach Parise. The key piece of information of that list is that of those 30 forwards, Johansen is younger than all of them except Johnny Gaudreau and Nikita Kucherov.

The most important aspect of this trade is Johansen going to play with Filip Forsberg. Since the start of the 2014 season, Forsberg leads Nashville forwards by a fair margin in individual scoring chances (318 in 130 games) at five-on-five (Craig Smith is second at 294). In fact, Forsberg is top-10 in the NHL in this regard over that span, behind only Alex Ovechkin, Vladimir Tarasenko, John Tavares, Max Pacioretty, Steven Stamkos, Marian Hossa, and Brandon Saad. In other words, Johansen is going to play with another elite, talented young forward. There is also a certain goal scorer named James Neal, who I hear is pretty good as well.

All told, considering his new environment, I would not be the least bit shocked to see Johansen to return to top-50 form in the fantasy realm, even for the rest of this season. He has already shown how good he can be over two full seasons, and I expect he gets back to that level sooner rather than later.

As with most young defencemen, Jones has a lot of maturing to do to his game. While the increase in ice time he will see in Columbus should mean good things as far as an increase in shots on goal, and real-time stats like hits and blocked shots, I am not so sure about an increase in points.

There have been 148 defencemen play at least 2000 minutes at five-on-five since the start of the 2013 season (Jones’s rookie year). At 0.65 points per 60 minutes, Jones is tied for 91st with several others. Those several others are Brooks Orpki, Nicklas Grossmann, Chris Tanev, Zach Bogosian, Eric Gryba, Jake Gardiner, and Roman Polak. What I bet the public doesn’t realize is a huge portion of Jones’s points came on the power play when he was with Nashville. In fact, power play points accounted for 38-percent of his points. Some are worse offenders – Shea Weber is at 44-percent since 2013, Drew Doughty is at 40-percent – but Jones himself hasn’t been a great producer at five-on-five so far in his career (again, he still isn’t close to reaching his prime yet).

I only bring that up with regards to Jones and Columbus because this isn’t a very good team. While producing points on the power play is nice for PPP categories in roto leagues, it won’t help his plus/minus much (a category that should suffer even more after the trade than when with Nashville). That’s why before running out and trading for him, or adding him off waivers, I would recommend fantasy owners look to see what they really need in the second half of the season. If your plus/minus is already in peril, I would avoid.

Looking forward, it’s important to keep an eye on his offensive development. Over his career, Jones has shown to be a better defensive defenceman than an offensive one. Just look at this chart from Domenic Galamini’s site Own The Puck:

Seth Jones HERO Chart – From Own The Puck

He’s been much better at defending than creating, which is probably a good thing for Columbus. This is another word of warning for those in dynasty/keeper leagues: don’t just run out and acquire Jones with the assumption he will flourish when given a feature role. It is entirely possible he falls into the Better In Real Life Than In Fantasy category like Ryan Suter or Jay Bouwmeester.

This is a coup for Philadelphia Flyers general manager Ron Hextall. He managed to alleviate serious salary cap concerns – particularly Lecavalier – and got a decent return for it. It should be noted that Philly will be paying half the salary, but it seems to be worth it nonetheless.

Lecavalier has almost no fantasy value and Schenn has just a bit more. Schenn had been somewhat useful in leagues that count hits and blocked shots, but I imagine he takes on an even smaller role in Los Angeles than he did in Philadelphia, and that will hurt those categories a lot. Even in those real-time stats leagues, Schenn probably isn’t deserving of a roster spot unless it’s a very deep league.

Neither acquisition for Los Angeles is of much concern for fantasy, though Jordan Weal is a name some owners should get to know. He turns 24 in April, and has 139 points in his last 149 games in the American Hockey League. Those aren’t superstar numbers, but very solid nonetheless.

The problem for Weal is that he may not be given a feature role with the Flyers for a long time. The team still has Claude Giroux, and Sean Couturier is in the midst of a full breakout season. If Weal were to be eased into a second line role, it seems he is a player that has a reasonable shot at 50 points. Until he’s given a legitimate shot, he probably won’t be fantasy relevant. Given Philadelphia’s current centre depth, he won’t be more than a third line centre for a while yet, and that’s mostly irrelevant for fantasy.

The only other trade worth fantasy consideration was Zack Kassian going to Edmonton (well, their AHL team anyway) for goaltender Ben Scrivens. Scrivens should get starts until Carey Price returns (which may be another month. Scrivens should be used very sparingly.

I have more interest in Kassian. This is a guy that seems to be on his last leg in the NHL. He was given an opportunity to prove himself in Montreal, and ruined it. If he can’t turn around his career in Edmonton, this might be the end of the road. I still hold out hope that Kassian can be a second or third line winger in the NHL, but only time will tell now.

*Some stats from Hockey Reference, Hockey Analysis, War On Ice, and HockeyDB.