Times Are Changing For The New York Islanders

After a summer of changes the Islanders are becoming a force to be reckoned with early this season. 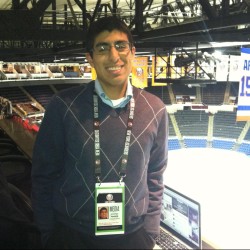 NEW YORK — Tuesday’s Islander-Ranger game had all the makings for a New York Islander loss. They were outplayed for forty minutes and dominated by the New York Rangers in the second period. The Isles caught a break by ending the period tied at two.

But then something happened in the third.

Instead of rolling over in the game’s final period, like they may have done in the past, the Islanders rallied to score four goals and beat the Blue Shirts 6-3 at Madison Square Garden. The 2014-15 will be a special year for the Islanders with it being their final season at the Nassau Coliseum, and their play on the ice through the first three games are making it seem that more special things are coming.

The Islanders are 3-0-0 to the start the year, their best start since 2001-02 when they went 4-0-0 to start, and are being bolstered by the new goaltending, forwards and defenseman they picked up over the offseason. Something that was on display as Jaroslav Halak stopped 32 shots though the first to periods, ultimately finishing the game with 40 saves.

He kept the Islanders in it while the chips were down.

“It helps having [Halak] back there,” said Kyle Okposo, who scored an early third period goal to get the Islanders rolling. “He real backstopped us tonight. He kept us in the game and allowed us to get our legs going. Once we did we took the game over.”

And that they did Tuesday night. It is the sign of changing times for the Islanders. After this season they’ll move from the antiquated Nassau Coliseum to the start of the art Barclays Center in Brooklyn, they’ll have new ownership joining the fold who will ultimately take majority control in two years, and most importantly they spent money in the offseason to improve the team.

Those improvements have paid dividends early. New defenseman Johnny Boychuk has six points (two goals, four assists) through the first three games and stabilized the defense and the other new defenseman, Nick Leddy, scored his first goal as Islander on Tuesday. Nikolay Kulemin and Mikhail Grabovski have contributed offensively as well and new goaltenders Halak and Chad Johnson have been anchors in net.

Not to mention the home-grown talent in Brock Nelson having an explosive start to the year and team captain John Tavares back to his dominant ways.

But what has been even more noticeable after three games is the Islanders mindset. Sure, they could have been patting themselves on the backs after Tuesday night’s win and the hot start. They weren’t.

“Tonight wasn’t a great game for us,” Matt Martin said. “We’ll go back and practice tomorrow. I’m sure the coaches will have some tape for us and find a way to be better on Thursday.”

Islander Head Coach Jack Capuano spoke to reporters after the game like a coach who had lost 6-3 rather than one who had jut won.

“As I said to them I shouldn’t have to go in after the second and say the things that I had to say,” said Capuano, sounding more like a disappointed parent than an NHL coach. ” They should know the way that we need to play. I’m pleased that they responded, but we just have to make sure the constancy in our game and how we need to play is the focus. I was pleased with that though.”

Things have certainly changed around the Islanders. At the moment it would be hard to argue that they won’t be contending for a playoff spot come April. The Isles used the slogan “A Shift in Power” last season after their playoff of run in 2013. The Isles floundered quickly last year and that shift never occurred.

Maybe that mantra was a season too soon.