The Boston Bruins defeated the Detroit Red Wings 4-1 in Game 2, largely on the shoulders of Justin Florek and the special teams. 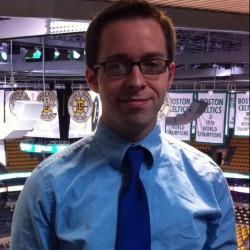 Jesse Connolly
Jesse Connolly is the founder and editor of alongtheboards.com, and an NHL contributor for XN Sports. The Massachusetts native has been a member of the Professional Hockey Writers' Association since 2009.

It wasn’t as if Justin Florek was thrown to the wolves, but the 23-year-old winger faced a tough task in his first shift of Game 2 Sunday between the Bruins and Red Wings.

With Boston on the penalty kill, Florek was called upon to help the B’s stop Detroit from taking control of the pivotal contest early. Alongside Gregory Campbell, he helped Boston thwart the Wings’ dangerous man advantage.

That became a running theme throughout the game.

Florek saw 2:12 of time on the PK and helped Boston stop all four of Detroit’s power plays in a 4-1 victory, which tied the series up at a game apiece.

“Guys are playing hard. There’s a lot of blocked shots going on this time of year,” Jarome Iginla said of his team’s penalty-kill prowess in the matinee. “Our PK definitely puts it on the line and they’re hard to get it through. They read it well. … We’ve been going over a lot of things and we’ve got a lot of respect for their power play over there. They’re creative guys. We don’t want to give them that many opportunities. We know it’s playing with fire. But tonight they (the PK) were very strong and a big part of the game.”

Florek is no stranger to being counted on when his team is shorthanded.

“I kill a lot in Providence,” said Florek, who appeared in his sixth-ever NHL game Sunday. “It’s a big part of my game and something I contribute to the team. It’s great to be able to come up here and do that and be confident with it.”

Two minutes after Detroit’s first power play expired, Florek shined down the other end of the ice. A 19-goal scorer for Providence in the AHL this season, the 6-foot-4 winger buried Boston’s first goal of the playoffs, as Wings goalie Jimmy Howard came way out of his net and misplayed the puck in the slot.

“Yeah, I thought he kind of was,” Florek said when asked if he expected Howard to be so aggressive. “I just tried to read him. It was a lucky bounce. I think it hit the defenseman and came right to my stick. Right spot, right time, I guess.”

A native of Marquette, Mich., Florek was asked what kind of a boost the big goal will give him going forward.

“It’s great to get confidence and everything, and to get that goal was pretty cool, but it was just great to get the team going,” said Florek. “To put up a couple goals like that was good for our team.”

Boston built its lead to two when Reilly Smith scored on the man advantage later in the first period. The B’s not only kept Detroit’s power play off the board, they also tallied twice on four man-advantage opportunities.

“I thought it was definitely a goal to get in front of him, to be right outside the paint and be battling for rebounds more,” Iginla said when asked about Boston’s strategy against Howard, who had a 25-save shutout in Game 1. “The first PP goal we got was definitely an example of that there. We got shots in front and Louie was able to battle away and we were able to squeak it through his legs, and Reilly was right there to put it in. That’s one thing you have to do: be there around the net for second and third chances.”

When asked about the relief that came along with an early goal, Iginla dismissed the notion of the the B’s confidence being shaken coming in after being blanked in the series opener.

“Guys weren’t doubting and stuff, but it’s always nice to get that first one and be able to roll from there,” said Iginla, who notched two assists in the victory. “Special teams were a big part of the game tonight. That PP goal was big and our PK came up huge for us.”

The Bruins will now venture to Detroit for Game 3. Florek liked the extra feist his team showed Sunday and hopes they can carry that over to Tuesday’s tilt at Joe Louis Arena

“I think the attitude we came out and played with today — you never want to lose Game 1 — I think we played with a little chip on our shoulder,” the rookie winger said. “It was a good start for and I think we played (well) from start to finish. … We were definitely hungrier and that’s the way we want to play the rest of the series.”